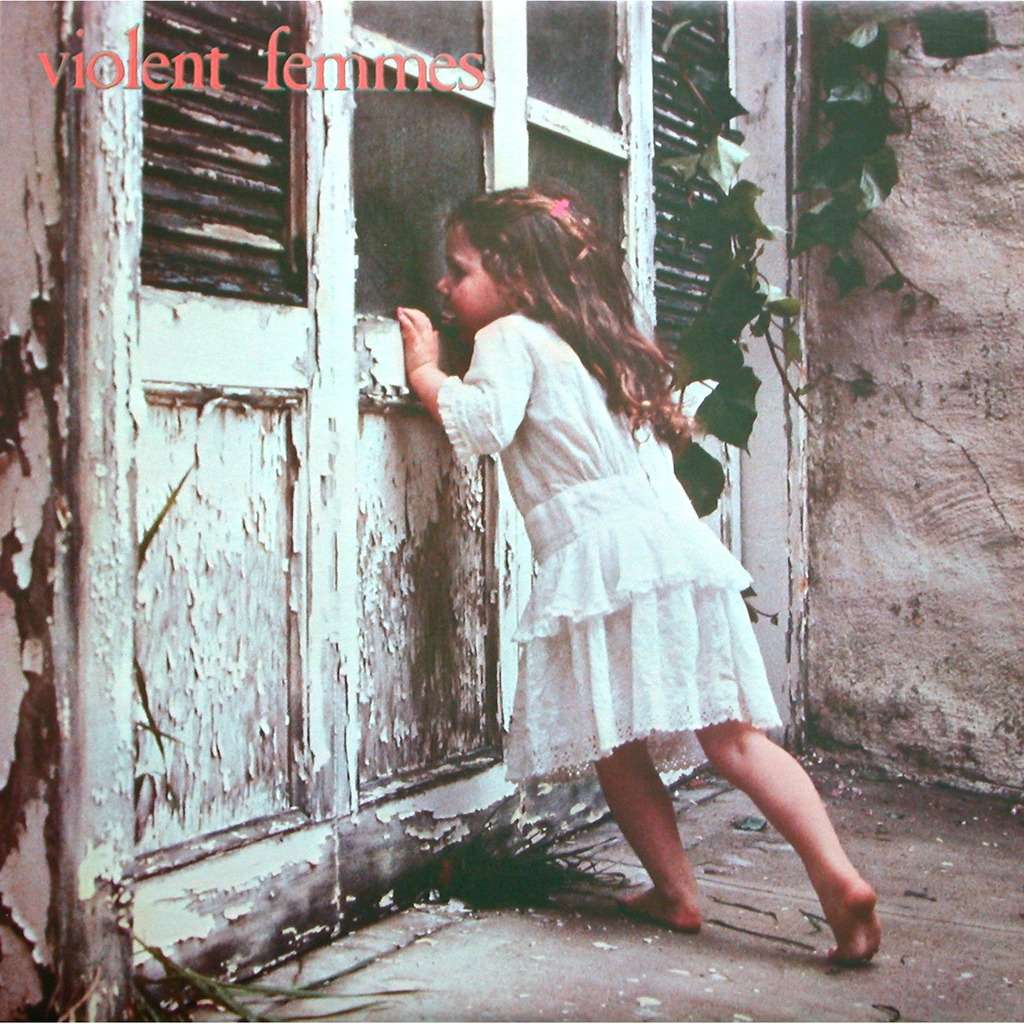 Warning: The below content is not appropriate for children. Please check with an adult before you read this page. To go back to the children’s page, please click here.

In September 2016, J.K. Rowling was invited to be a guest listener on Ruth & Martin’s Album Club, in which special guests review an album they have never heard before.

I’m not quite sure how the Violent Femmes passed me by. I turned 18 the year this album came out, but I was obsessed with The Beatles at the time. Of contemporary bands I really loved, the standouts were the Smiths and the Psychedelic Furs. I loved any band with a great guitarist. I played guitar myself, mostly alone in my bedroom.

It’s possible that I heard the Violent Femmes but I’ve forgotten. They could easily have been part of the informal seminars on alternative music I received from the muso I dated in my late teens. His parents were Dutch and we hung out mostly at his house, because we were allowed to smoke in his attic bedroom. I’ve got happy memories of sunlit wooden rafters and smoke rings and walls covered in black and white pictures he’d clipped out of NME, while the Dead Kennedys, Jah Wobble or the Birthday Party blasted out of the speakers. Setting aside the fact that I had a pair of very long-lived goldfish named after Guggi and Gavin of the Virgin Prunes, I never became a whole-hearted convert of his favourite bands. Much as I adored him, I didn’t share Muso Boyfriend’s attitude to music: his scorn for the accessible and tuneful, the baffling mixture of irony and obsession with which he regarded his favourites, and his conviction that if the herd hates something, it’s almost certainly brilliant.

The NME was Muso Boyfriend’s bible and it took a hard line on nearly anything commercial or popular, talking about bands in the top ten with the kind of contempt most people reserve for child abusers. A few real Gods could be forgiven commercial success, obviously: people like Bowie or the Stones, but the likes of Nik Kershaw might as well have been Thatcher herself as far as NME were concerned

When the Stranglers released ‘Feline’ and it went to number 4 in the album charts, an NME journo went into meltdown, ranting about the fact that people who’d never heard ‘Rattus Norvegicus’ were now calling themselves Stranglers fans. You could almost see the flecks of spittle on the page. (I’d bought ‘Feline.’ I didn’t own ‘Rattus Norvegicus.’) And I still vividly remember an NME interview with Gary Kemp from Spandau Ballet, a band I never liked, though I admired Gary’s chutzpah in agreeing to talk to them. The interviewer’s disapproval of Gary and everything he stood for reached a glorious peak with the phrase ‘this whorehouse called success.’ I never made much headway arguing about this sort of thing with Muso Boyfriend, though, so after a bit of snogging I’d cycle home and listen to ‘Rubber Soul.’

My first live gig and my first music festival were both with Muso Boyfriend: Big Country at Dingwalls in Bristol, supporting act: John Cooper Clarke, the punk poet. We spent my 18th birthday at the Elephant Fayre in Cornwall, hitching there from South Wales. I’d told my parents some whopping lie about how we were getting there, probably that Muso Boyfriend’s older brother was driving us. Half an hour of unsuccessful hitching later, it suddenly occurred to me that my parents had said they were going shopping later. This meant they might soon be driving past us, so I kept diving for cover every time a Honda Civic came into view.

We finally got a lift, thank God, so I survived to enjoy my birthday at the Elephant Fayre. We pitched the two-person tent by a marquee full of Rastas selling tea and hot knives and saw the Cure, whom Muso Boyfriend was weirdly keen to hear, in spite of the fact that they’d actually been on Top of the Pops. The only other act I remember well from the Elephant Fayre is Benjamin Zephaniah. He did a poem about having the shit kicked out of him by a policeman. Twenty odd years later, I was on a team with him at a kids’ book quiz at the Edinburgh Book Festival.

You’ve now listened to it, at least 3 times, what do you think?

I didn’t Google the band or the album before listening, because that felt like cheating, so I knew virtually nothing about them except that this came out in 1983. When I told my friend Euan which album I was going to review he assured me I’d like it, but his favourite album’s by The Cramps, so that wasn’t entirely reassuring.

Wanting to concentrate, I go outside to my writing room in the garden, which has a wooden ceiling. This, unlikely as it may seem, is relevant information.

So I put on the Violent Femmes and hear a catchy acoustic guitar riff and I think, this is great! I’m going to love them! I’ll get a Violent Femmes T-shirt, buy the entire back catalogue and bore everyone rigid with my new obsession!

But then the vocalist kicks in and I have an immediate, visceral response of ‘no, scratch everything, I hate this.’ The change of mood is so abrupt my mind goes blank. I try to analyse why I moved from appreciation to intense dislike in a matter of seconds, but the best I can do is ‘I’ve heard voices like that before.’

By the time I reach track seven, all I can think about is the Toy Dolls’ cover of Nelly the Elephant. I’m not proud. I know this says more about me than the Violent Femmes.

After I’ve listened to the whole album once, I look down at the place where I was supposed to be making notes and all I’ve written is: ‘his upper register sounds like a bee in a plastic cup,’ which the professional writer in me recognizes as ‘not 500 words’. Feeling glum, I postpone a second listen to the following day.

It’s raining next morning and I can’t be bothered to go and find shoes, so I don’t take the album into the writing room, but stay in the kitchen. With minimal enthusiasm, I put on the album again.

This is weird. The vocalist is actually, um… good. Where did the bloke I heard yesterday go? Now I’m not busy hating him, I notice all the great hooks and how they sometimes sound like a manic skiffle band. There’s a nice bit of bluesy slide guitar and an actual xylophone on ‘Gone Daddy Gone’. Plus, when he half talks, half sings, Gordon Gano (I checked the album credits) sounds a bit Lou Reed, and I love Lou Reed. Apart from being the vocalist, Gano also happens to be the guitarist I fell for yesterday.

I can’t understand why he grated on me so much first time round. Beneath my wooden ceiling, he was the Ur-voice of all those NME-approved punky bands I never liked: nasal, whiny and brash. Today, sitting beside my kettle, he’s raw, catchy and soulful.

Only then, staring into a mug of tea, do I have the little epiphany that you, clever reader, saw coming a mile off. Listening to an album that reeks of 1983, in a room that bears a passing resemblance to that attic of long ago, was a mistake. It wasn’t Gordon Gano who was the problem: it was me. I was listening with a ghostly eighteen year old ex-boyfriend at my shoulder, and behind him, a chorus of snarling early eighties NME journalists, all ready to jeer, because even if I like the Violent Femmes, I’ll like them in the wrong way.

So the sun came out and I took the Violent Femmes back across the wet lawn into the writing room, telling myself that it’s not 1983 any more, and this is between me and the Violent Femmes, nobody else. On the third listen, I realized that I loved the album. Before I knew it, I was listening to it over and over again. Only then did I let myself look at their Wikipedia page.

The Violent Femmes, I read, were ‘one of the most successful alternative rock bands of the 1980s, selling over 9 million albums by 2005.’ Yes, the Violent Femmes ended up in that whorehouse called success, and you know what? It only makes me love them more.

You can read the full review here.